The Board of Directors of DHH S.p.A. has examined and approved the consolidated financial statements report for the first half of 2019

Giandomenico Sica, Chairman of the Board of Directors of DHH, commented: “The first half of 2019 is in line with our historical trend. We were able to keep a double digit organic growth rate with 3.3M EUR of net sales in the period vs 2.9M EUR in the 1H2018. This semester was also important to consolidate the extraordinary operations that we made last year in the Balkans. As a consequence of this work, we built the operational infrastructure to prepare the group to execute new M&A deals. In these months we made an intense scouting activity, looking for new opportunities of acquisitions, bigger than the ones we made in the past. In fact, we believe that now DHH has the potential to address bigger opportunities, with the goal of making a jump in its size so to increase its market positioning in the Southeast Europe, where we are currently present with our 100.000+ customers spread across Italy, Italian Switzerland, Slovenia, Croatia, Serbia.”

PERFORMANCE OF THE GROUP

The profit and loss statement for 1H2019 reflects the application of the new accounting standard IFRS 16 – ‘Leases’: accordingly, the accounting for constant instalments of costs for operating leases is replaced by amortization of the right of use and calculation of financial charges on lease liabilities. The new standard was introduced starting from January 1st, 2019; the figures for the comparative period have not been restated.

During the 1H2019 the total consolidated revenues of DHH are equal to 3,38M EUR.
DHH is focused on web hosting and cloud computing services as a core business line and its revenues are approx. 1,07M EUR in Italy (Tophost and DHH Italia), 833k EUR in Slovenia (DHH.si), 1,07M EUR in Croatia (DHH and System Bee), 259k EUR in Serbia (mCloud) and 114k EUR in Switzerland (DHH SWZ); during 2019 there was a merge between DHH SRB and mCloud so to improve the efficiency in the operations and as a result the remaining company is mCloud doo. The consolidated EBITDA of the period amounts to 242k EUR.

With reference to the main level of operating profitability, the application of the new method of exposing lease transactions determined, during the first half of 2019, a positive effect of 53k EUR on EBITDA with IFRS 16 effect. 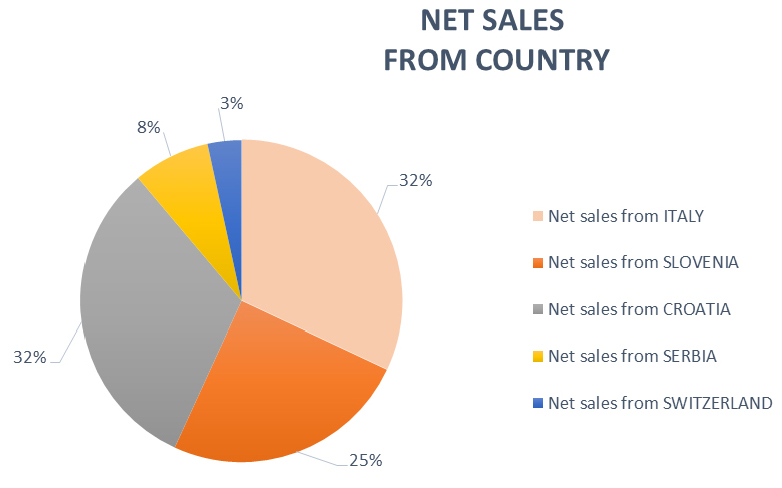 * The consolidated pro forma is not audited by the audit firm but it has been checked only the mathematics accuracy.

* The consolidated pro forma is not audited by the audit firm but it has been checked only the mathematics accuracy.

The consolidated pro-forma is unaudited and has been prepared:

The following events took place on the dates indicated below:

DHH announces a change of shareholders, accordingly to article 17 – Rules for Companies. Seeweb Srl, in the framework of an internal reorganization activity, transferred its 360.000 shares of DHH (equal to the 25,352% of the social capital of DHH) to Seeweb Holding Srl.
The shareholding structure of Seeweb Srl and Seeweb Holding Srl is the same and in both cases, the majority owner is Antonio Domenico Baldassarra.

DHH announces to have completed the merger between the two portfolio companies mCloud d.o.o. and DHH SRB d.o.o. so to result in a single entity (ref. press release March 28, 2019). The merger has been designed to simplify the group organization and operations, following what already done in Slovenia and in Croatia.

DHH during the BoD announces that Giandomenico Sica, Uroš Čimžar, and Matija Jekovec, have been re-appointed as executive directors of the company. Giandomenico Sica, Chairman of the Board of Directors, will have also the responsibility of the Investor Relations activities.

DHH announces that on 21 June Tomaž Koštial has been appointed as CEO of DHH.si. Matija Jekovec, director of DHH S.p.A, comments: “I’m happy that the internal executive program is yielding such excellent candidates as Tomaž and we’re all looking forward to the energy that the newly appointed CEO will bring to the company.

DHH announces that on 18 July 2019, pursuant to article 17 of the AIM Italia Rules for Issuers, it has appointed EnVent Capital Markets Ltd as new Nomad; the assignment will take effect from 19 July 2019.
EnVent Capital Markets Ltd, within the two months following the engagement, will complete the verification of the existence of suitable procedures to guarantee the compliance by DHH S.p.A. with the AIM Italia Issuers Regulation.

DHH announces that the period during which entitled shareholders may request the free allocation of bonus shares will begin on 28 July 2019, as stated in section 4.1.2 of the Admission Document relating to the IPO and admission to trading of DHH ordinary shares on the Stock Exchange organized and managed by Borsa Italiana S.p.A. (the “Admission Document”).
The bonus shares will be reserved to the assignees of the shares in the context of the IPO who have uninterruptedly maintained full ownership of such shares for thirty-six months from the start of trading (July 27, 2016), provided that the same shares remained deposited with a Placement Agent or with other entities that are members of the Monte Titoli S.p.A. system.
In particular, investors who were allocated with shares in the context of the IPO will be entitled free of charge to 1 Company’s ordinary share (ISIN IT0005203622) for every 5 shares ordinary with bonus share allocated in the context of the IPO (ISIN IT0005203663).
The number of bonus shares to be allocated at no charge will be calculated by rounding down to the nearest whole number.

DHH announces to have completed the process of appointment of Veljko Drakulić as CEO of DHH d.o.o. (DHH Croatia). This appointment is part of a broader process aimed at renewing and improving the governance of the local portfolio companies of DHH through the promotion of internal managers (ref. press release, 27 June 2019) or the appointment of a new – young – external management. Uroš Čimžar, executive director of DHH S.p.A, comments: “We were looking for something specific and found it in Veljko. His fresh energy, combined with managerial and sales experience, will help him to reach the ambitious goals he set for himself and the company.”

DHH announces that 68.550 bonus shares have been allocated to entitled shareholders, as approved by the company General Shareholders Meeting held on June 9, 2016.
As defined during the IPO process, the shareholders that in the IPO have underwritten shares of the Company and have maintained them until July 27, 2019, and have applied for the allocation of the bonus share in the period between July 28, 2019 and August 27, 2019, have been granted, free of charge 1 Company’s ordinary share (ISIN IT0005203622) for every 5 shares ordinary with bonus share allocated in the context of the IPO (ISIN IT0005203663).
The allocation of the new 68.550 ordinary shares, which have the same features of the outstanding ordinary shares, determines the increase of the Company’s share capital to Euro 148.855,00  represented by 1.488.550 ordinary shares with no nominal value.
The Company will publish the press release related to the variation of the share capital after the deposit of the execution of the capital increase in the Enterprises Register in accordance with the terms of the law.